Do you need Oculus to Different Drive without Reinstalling on another drive? Now Oculus app can only be installed on your C: drive and all the Oculus Rift games will be saved to where the Oculus app installation locates. If you have a small solid state drive (SSD) as C: drive and a large hard disk drive (HDD) to store data, you may want to install Oculus games on a different drive to free some space out of your system drive. 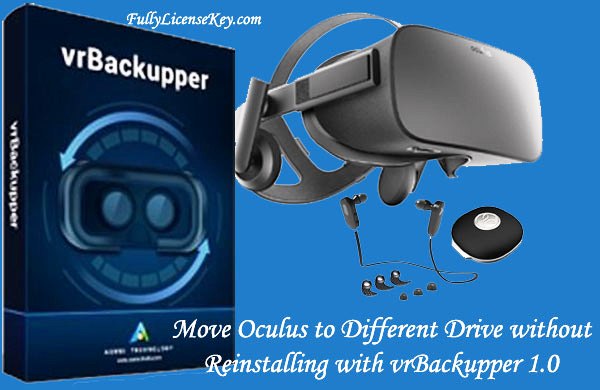 AOMEI vrBackupper is complete free and easy-to-use tool to move Oculus games to another drive. With this freeware, you don’t need to uninstall and reinstall. The program will even detects the installation directory automatically, which makes the process even simpler.

How to Move Oculus to Different Drive without Reinstalling with vrBackupper  1.0?

Step 1: Download and run vrBackupper. You need to shut down Oculus app before the following operation. 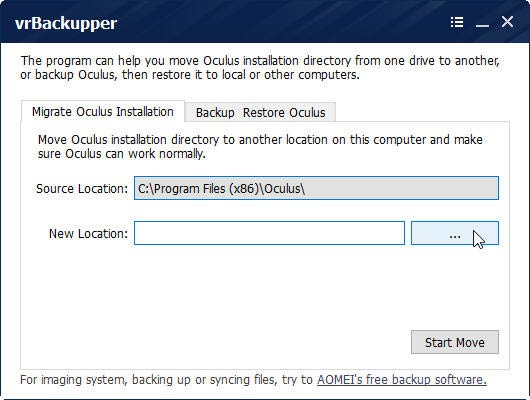 Step 2: Click the “…” button to select a different drive or a folder to save Oculus games by clicking.

In a short while, the process will be done. Be aware that the program will delete the files in the original location in order to free more space on C drive. Then you have installed Oculus games on a different drive. 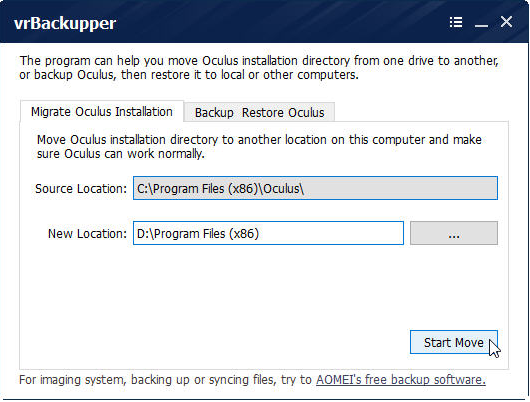 AOMEI vrBackupper help you to migrate Oculus installation to another place without data loss.

Now it detects the Oculus listing instantly at the beginning, and lists the two options migrate or backup/restore in the main screen, migration tab by default.

AOMEI vrBackupper is the first Oculus backup software in the world. AOMEI vrBackupper helps you protect & manage your Oculus Rift and make you use Oculus Rift more easily. Now vrBackupper only supports Windows 10 64-bit computers by far, but it will be compatible with other Windows operating system in the near future.

You should consider try this amazing software! In addition, you can also backup and restore files/folders, system, partitions and disks with another Download AOMEI vrBackupper AOMEI Backupper. AOMEI Backupper is a computer backup software, which can complete full backup, incremental backup and differential backup, it is a freeware, which supports all PCs. you can know more information about it.